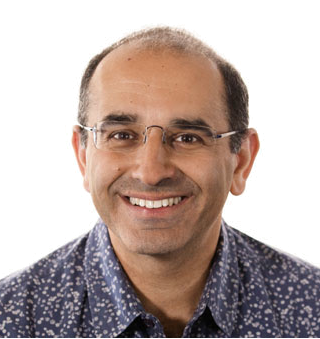 Zoubin Ghahramani is Professor of Information Engineering at the University of Cambridge and Chief Scientist at Uber. He is also Deputy Director of the Leverhulme Centre for the Future of Intelligence, and a Fellow of St John’s College. He was a founding Cambridge Director of the Alan Turing Institute, the UK’s national institute for data science. He has worked and studied at the University of Pennsylvania, MIT, the University of Toronto, the Gatsby Unit at University College London, and Carnegie Mellon University. His research focuses on probabilistic approaches to machine learning and artificial intelligence, and he has published over 250 research papers on these topics. He was co-founder of Geometric Intelligence (now Uber AI Labs) and advises a number of AI and machine learning companies. In 2015, he was elected a Fellow of the Royal Society for his contributions to machine learning.

Zoubin Ghahramani FRS is Professor of Information Engineering at the University of Cambridge, where he leads the Machine Learning Group consisting of about 30 researchers, and Chief Scientist at Uber, where he leads Uber AI Labs. He served as the founding Cambridge Director of the Alan Turing Institute, the UK’s national institute for Data Science, is Deputy Academic Director of the Leverhulme Centre for the Future of Intelligence, and a Fellow of St John’s College Cambridge.

He studied computer science and cognitive science at the University of Pennsylvania, obtained his PhD from MIT in 1995, and was a postdoctoral fellow at the University of Toronto. His academic career includes concurrent appointments as one of the founding members of the Gatsby Computational Neuroscience Unit in London, and as a faculty member of CMU’s Machine Learning Department for over 10 years. His current research interests include statistical machine learning, Bayesian nonparametrics, scalable inference, probabilistic programming, and building an automatic statistician. He has published over 250 papers, receiving over 38,000 citations (an h-index of 84). His work has been funded by grants and donations from EPSRC, DARPA, Microsoft, Google, Infosys, Facebook, Amazon, FX Concepts, NTT and a number of other industrial partners. In 2013, he received a $750,000 Google Award for research on building the Automatic Statistician. He has served as advisor to Microsoft Research Cambridge, VocalIQ (acquired by Apple), Cambridge Capital Management, Echobox, Informetis, Opera Solutions, and several other companies. He has also served in a number of leadership roles as programme and general chair of the leading international conferences in machine learning: AISTATS (2005), ICML (2007, 2011), and NIPS (2013, 2014). In 2015 he was elected a Fellow of the Royal Society, and in 2016 he was named as one of the Top Ten Most Influential Scholars in Machine Learning. More information can be found at http://mlg.eng.cam.ac.uk .

My early childhood was spent in the former Soviet Union and Iran. My family then moved to Spain where I attended the American School of Madrid for 10 years. I studied at the University of Pennsylvania where I was given the Dean’s Scholar Award and obtained a BA degree in Cognitive Science and a BSEng degree in Computer Science and Engineering in 1990. In 1995, I obtained my PhD in Cognitive Neuroscience from the Massachusetts Institute of Technology funded by a Fellowship from the McDonnell-Pew Foundation. My dissertation was entitled “Computation and Psychophysics of Sensorimotor Integration” and my PhD advisor was Michael Jordan. I moved to the University of Toronto in 1995 where I was an ITRC Postdoctoral Fellow in the Artificial Intelligence Lab of the Department of Computer Science, working with Geoffrey Hinton. From 1998 to 2005, I was faculty at the Gatsby Computational Neuroscience Unit, University College London.

I am currently Professor of Information Engineering, at the University of Cambridge, where I lead the activities in the Machine Learning Group. I am also Chief Scientist at Uber, where I co-founded and help lead Uber AI Labs. From 2002 to 2012 I was concurrently also an Associate Research Professor in the Machine Learning Department at the School of Computer Science, Carnegie Mellon University. I have also been Adjuct Faculty at the Gatsby Unit, University College London and at POSTECH, South Korea.

You can find my publications either on our group publications page, or via Google Scholar, or for a more complete list, on my CV.